How to Get Longbow in Ghost of Tsushima

The newly released Ghost of Tsushima is receiving a great response from the players, and gaining a massive amount of active players. In the amazing open-world game, players have to find various elements, weapons, and skills to move further. However, upgrading is one of the extremely major

The newly released Ghost of Tsushima is receiving a great response from the players, and gaining a massive amount of active players. In the amazing open-world game, players have to find various elements, weapons, and skills to move further. However, upgrading is one of the extremely major things on which most of the game and characters life depends. Now, if you like to shoot enemies from long range, you will love weapons like Longbow. Its a powerful weapon and can be used to make long-range attacks. Acquiring and upgrading the half-bow in Ghost of Tsushima is quite easy, but getting the Longbow is a lot trickier.

How to Find Longbow in Ghost of Tsushima

To acquire the Longbow, you need to follow a simple process. Move to the Hiyoshi Springs and talk to the NPCs to locate the musician. After getting the location, get close to the musician, and talk to him, and then you will be given a Mythic Tales: Curse of Uchitsune. 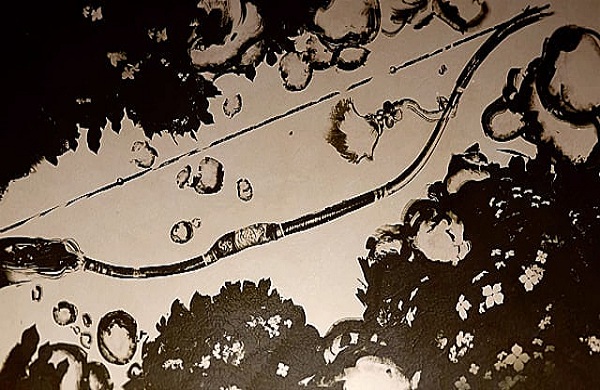 Source:-How to Get Longbow in Ghost of Tsushima

The following task is not related to the actual game story but a side mission that helps you to unlock some additional and iconic items. When you complete the Mythic Tales, you will be rewarded with some interesting rewards. To start your Curse of Uchitsune quest, move to the Hiyoshi Springs and then to the maps blue marker area.

The beginning of the quest happens in the same area, so it wont take long to reach the marked location. Listen to the story and instructions to get some help.

Once the story ends, navigate to the Hiyoshi Coast and look for some blue flowers. While discovering the location, you will find blue flowers quite soon. These flowers will lead you to the entrance of the cave. Once you are in the cave, locate the hanging painting. Interact with the painting and move around to find the right location.

In the following location, a small area will lead you to the top. When you hop over and exit from the cave, an angry monk will tell you to stop whatever youre doing. You simply have to ignore him and move to the Isonade Coast. Track down the blue flowers and get the hanging painting.

Travel to Ishikawas Dojo, which is near the mountain entrance. There you will find plenty of blue flowers and your Longbow weapon. When you grab and pick up the weapon, you will have to battle with Tengu in the Duel of the Demons segment.

Use your tactics and skills to defeat Tengu. Once you win from Tengu, your Curse of Uchitsune Mythic Tale will be successful, and the Longbow will be yours. You will gain several benefits from Longbow and it is more reliable than the half bow. The Longbows strength for dealing with damage is immersive.

Indeed, the Longbow is one of the best bow type weapons in Ghost of Tsushima. You need to put some effort to get this ultimate weapon. If you like to attack from far range, this weapon will help you.

John Smith has diverse interests that range from writing to video games. She has always had a strong passion for writing. She likes to write about games, tech events, security, and whitepapers. Her vast and varied knowledge aided by her supreme writing skills, have made her a powerful writer atoffice.com/setup.

Understanding Branding vs. Marketing – the Difference and Its Importance

What does an RF engineer do?

Web Optimization Drifts That Will Influence Your Organizations Online